William Outzen’s writeup of the playtest continued. Not the strongest beginning for the US Presidency:

Using their newfound majority, the Blue Party House Members elected Michael Jenifer Stone to serve as their Speaker. Daniel Hiester remained the real power in the country through his control of the Blue Party. Arnold had finally met his match. President Arnold decided to retain his cabinet with the exception of Tucker, nominating William Franklin for Ambassador to Spain instead. He hoped that this would get through the Senate this time. This decision however offended the South, as it stripped them of representation. Upon the retirement of General William Moultrie, one of the last heroes of the Revolutionary War was finally out of the military.

President Arnold continued to face down crises. The French Revolution continued unabated, and pressure was mounting to join them. He also faced the possibility of a treasonous General in Arthur St Clair. Evidence was mounting that he was selling secrets, but Arnold refused to place any stock in them, stating: “His loyalty to the United States is unmatched, and I daresay that he is just as loyal to these United States as I am. It is completely out of the realm of possibility that he could ever be anything more than a patriot.” He also resolved to remain neutral in the French Revolution, damaging his relationships with the foreign powers.

President Arnold turned to his cabinet for suggestions, but each idea they came up with plunged the nation further into a hole. He next instructed his ambassador to France to improve trade relations, but he failed. In Spain, his ambassador worked to successfully smooth things over and lessen the tension between America and Spain. Militarily they faced yet another immediate disaster, as Senior General Tadeusz Koscisuzko failed, followed by Wade Hampton failing as well. Without a bounty of good commanders, Arnold was forced to let them all remain. Arnold was fast approaching his reelection campaign, and failing.

Package 4: Natural citizenship if parents are born in US, Establish the office of the US Attorney General

In the Senate, the Federal Slave Tax failed due to opposition in the Southern States,  but everything else passed both there and in the House. President Arnold agreed to the bills and signed them, hailing his administration as a prime example of bipartisanship. He hoped that this would convince voters to return to him. Arnold used his executive actions to try to win voters, as well as roll out a policy of “Civilizing” Native Americans.

Most importantly, one of the bills created the Federal Supreme Court, with Arnold responsible for nominating 5 justices. President Arnold understood that this could very well be his most important action, and nominated Chief Justice William Patterson (the author of the Declaration of Independence), and four Associate Justices: John Dickinson, Robert Yates, John Tyler Sr, and Benjamin Taliaferro. Tyler Sr was the only reject, with Daniel Hiester standing in opposition. Arnold instead nominated Nathaniel Niles, who was confirmed.

Going into the 1792 election, President Arnold knew he faced defeat. He had worked to try to win over electors to his cause, but had failed. Vice-President George Washington was proposed as a candidate for President to replace Arnold, with Ambassador to England Charles C Pinckney, Pennsylvania Governor Daniel Hiester, and Francis Lightfoot Lee filling in the rest. The election was a bloodbath for President Arnold, as he and Washington did not take a single state. Francis Lee won the election unanimously, with Daniel Hiester chosen as the Vice-President. President Arnold graciously accepted his defeat, and ushered in a foreign concept: a peaceful transition of power. Following his loss, Arnold announced his retirement from political office, choosing instead to take up residence once again in Connecticut. 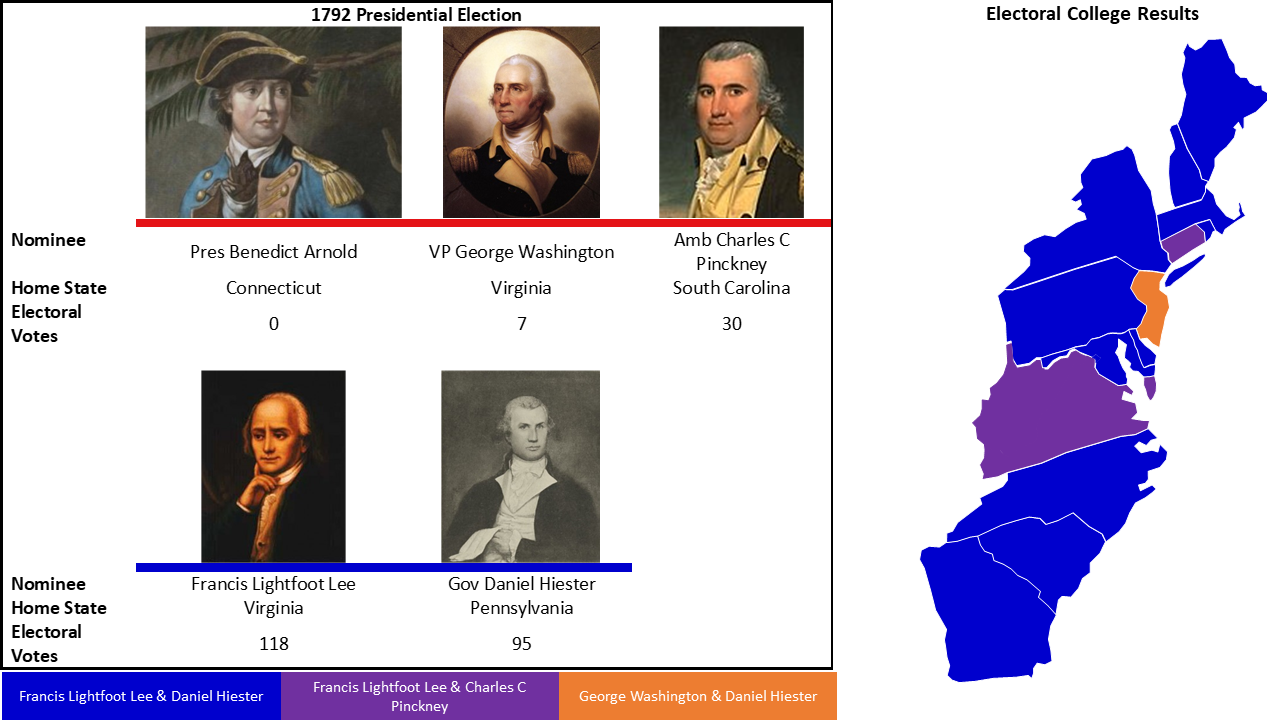