From time-to-time I’ll post a brief summary of what is going on in the playtest. We are currently in the 1790s, but I’ll start retelling our story from the beginning. Many thanks to Ted Froats, Christian Pratsch, William Outzen, Don Gonce, and Tyler Johnson for contributing to recording the history of the playtest.

The following comes from William Outzen’s retelling of the events of 1774-1776. It includes images created by Tyler Johnson. Biographical notes are by Gonce. [note: I’ve made some alterations to the original text for readability]:

“Immediately in 1774, the Continental Congress faced several pressing issues. Their budget in shambles, a rapidly deteriorating relationship with England, domestic instability, and a severe readiness crisis within their military, all the more frightening with the looming prospect of war with England.

Upon their arrival to the First Continental Congress, the delegates quickly found that they split into two camps. In the media, these factions became known as the Reds (those arguing for a strong central government), and the Blues (those arguing for a more decentralized government and independence). Of the two, the Red party had the majority in 8 state delegations, and split two more.

It was agreed that leadership was necessary in the body, so both parties nominated several candidates. Different factions in the Red party nominated several delegates: Thomas McKean of Delaware, Henry Middleton of South Carolina, John Jay of New York, and Henry Laurens of South Carolina. The Blue party also nominated several candidates: Richard Henry Lee of Virginia and Thomas Jefferson of Virginia. John Jay quickly emerged as a compromise candidate for the Red Party, with Richard Henry Lee doing the same for the Blue Party, though Jefferson did pick up votes. The final tally was 5 for Jay and 3 for Lee, with 5 states abstaining. The position was largely powerless, but did give him notoriety in Europe and throughout the colonies.

Jay’s first action was to appoint the first chairs of the Congressional committees. He chose to reward Red party members for their loyalty and votes. His chairs were George Matthews, Thomas McKean (a bone to console him for his Presidential loss), Henry Laurens (his motivation here was much the same), and William Paterson. For committee membership, the parties agreed to an even split. 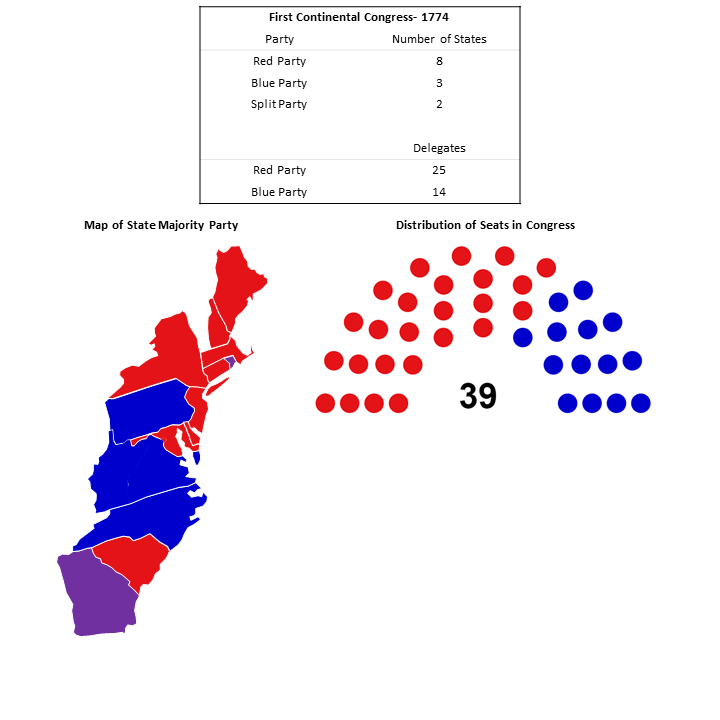 But even within the parties, there were divisions. Six different factions arose within each party, each with a leading figure. These leaders were Benedict Arnold, Thomas Heyward Jr., Simeon Olcott, John Dickinson, George Clinton, John Hancock, Samuel Adams, Benjamin Franklin, Thomas McKean, Samuel Huntington, Thomas Jefferson, and William Paterson. After these elections and backroom politicking, they got down to the real task of deciding their purpose and plan of action.

John Jay immediately faced several vital decisions. First, he had to face down economic pressure from England in the form of their Prohibitory Act, blockading the colony’s ports. Through careful navigating, and no small amount of luck, he was able to guide the colonies through it with little economic impact. He also had to deal with Virginia going rogue and challenging Governor Dunmore, who proclaimed loyalty to the crown and offered freedom to slaves of traitors. Thomas Jefferson publicly proclaimed that men have unalienable rights, and that Dunmore was in violation of them.

Facing increasing pressure to make decisions, Jay proposed a Declaration of Resolves, an action that would push against English authority. He also pushed for the Continental Congress to join with Virginia in pushing back against Lord Dunmore, and against the potential freeing of slaves. Behind the scenes, he encouraged wide circulation of Thomas Paine’s Common Sense, in order to ferment revolutionary fervor. The Continental Congress concurred with him, coming together in a large majority. Several factions opposed several of Jay’s actions, but none in any amount to challenge his authority.

Jay next took a back seat as Congress got down to the business of legislating. The Chairs led their committees in choosing legislation to present to the congress. With the Red party in control, they had the driver’s seat in any legislation. They faced questions regarding their military preparedness and domestic stability, as well as the thorny question of what was to be done with loyalists to the crown. After weeks of debate and dealing, the Congress presented the floor a single package calling to Boycott British Goods, to create an Ambassador to France, to create a Department of State, to create a framework for Future Western States (awfully ambitious), to establish a Continental Army, and to seek Alliance with Anti-British Native Tribes. It wasn’t a particularly close vote, with 12 states agreeing to the package. This was a massive step towards war with England.

Silently, with the support of Congress, John Jay began to consider an able statesman to write the Declaration of Independence, and began to consider the military officers he would be required to appoint. He turned first to his close friend William Paterson, who began work at once to craft a document that would last the ages.
Their work done, they returned home to tend to their affairs. A majority of the members did not stand for reappointment, including John Jay. He had had enough of leading the Congress, and wanted to apply his talents elsewhere. The new Congress saw the Red Party continue their dominance, controlling the delegations of 7 states.” 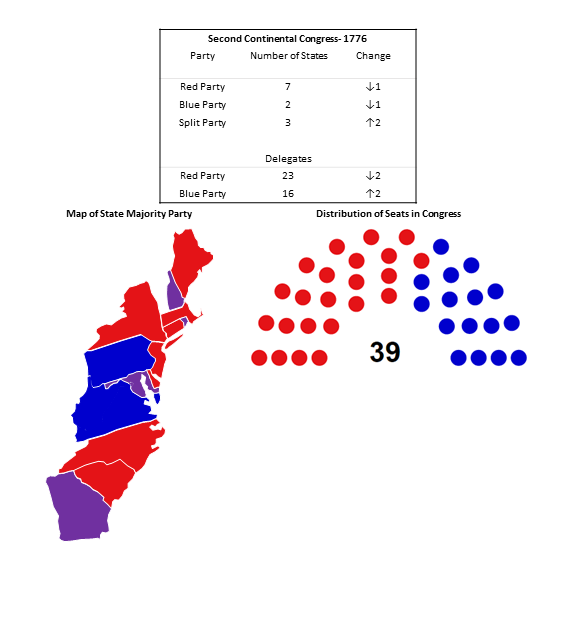 Stay tuned for more tales from playtesting. Until then, pre-order the game here, if you haven’t done so: https://270soft.com/pre-order-a-more-perfect-union/